How to Resolve Inappropriate Toileting in Cats

Does your cat go to the toilet in all the wrong places?

Inappropriate toileting is the most common cat behaviour problem I'm called in to assist with. It's a messy, smelly and frustrating issue for many cat owners and can be a source of stress and anxiety for both human and feline family members.

So why do cats toilet inappropriately and how can this behaviour be resolved? 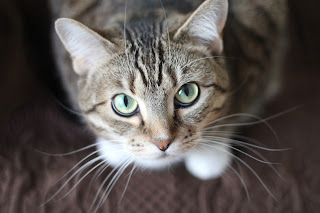 What is inappropriate toileting?

The term "inappropriate toileting" (also called inappropriate elimination) is an umbrella term which covers several elimination problems in cats. These include urine marking/spraying; inappropriate urination and/or defecation. Simply put - any form of elimination done inside the home and outside of the litter tray.

In my consulting work, as a behaviourist, I've seen cats that toilet inappropriately or spray on clothes, shoes, handbags, shopping bags, suitcases, carpet, furniture, human beds, dog beds, in the bath/shower, sinks, wardrobes, on walls, doors and even in a water bowl!!

Causes of Inappropriate Toileting in Cats

If your cat toilets inappropriately the first thing to do is to make an appointment for a check up at the vet. A number of physical issues, such as UTI's and bladder infections, can be responsible for initiating toileting problems and must be addressed before the issue is treated as behavioural. Cats that experience pain or discomfort whilst using their litter tray can then associate using the tray with a feeling of pain or discomfort. This can result in the cat avoiding using the litter tray in future, even though the health issue may have resolved.

If a health or medical reason has been ruled out it's fair to assume the problem is behavioural. There are many reasons why a cat might stop using it litter tray. Here are some of the more common reasons I encounter in my work:

A lack of prior litter training

Learning to toilet in the right place is behaviour kittens learn from their mother. Kittens that were separated from their mother and siblings too early often miss out on this early learning. The environment in which the kitten was raised also affects their toileting habits. For example, kittens that were not given ready access to litter trays may not necessarily understand how to use one when they go to their new home.

Negative association with the litter tray

When a cat suddenly stops using their litter tray sometimes it's due to a negative association. This can  occur for several reasons including the location, orientation or design of the tray. For example, I once had a consultation with a cat who suddenly stopped using the litter tray after moving house. After assessing the cat and the new home environment I saw that the tray was placed right next to the dryer, which was quite loud when in use. Once the tray was moved away from the dryer, the cat started using it again.

The tray design and litter type also matter. Choose a tray style your cat is accustomed to and comfortable with. I see many cat owners choosing small or enclosed litter trays for large cats who have difficulty using them comfortably. Cats can also develop a strong substrate preference in terms of the type of litter material they prefer. Try to keep the litter consistent from when they were a kitten or conduct a 'substrate test' in which you offer several different types of litter at once and see if your cat prefers a specific type. Then, stick with that one.

Competition for access to litter trays in multi-cat homes

The general rule for the provision of litter trays in indoor only multi-cat households in one tray per cat plus an additional tray. This may sound excessive, however cats are highly territorial by nature and often avoid using trays that hold a strong scent of another cat, even one they live with and get along well with. Eliminating competition for access to trays can help reduce inappropriate toileting.

Cats are highly territorial animals by nature. In the wild, they go to great lengths to maintain a territory and keep others away because their survival depends on it. Even though domestic cats are provided with everything they need to survive (indeed, thrive!), they still retain the instincts to protect their territory. Urine marking is one way cats communicate that territory is occupied. It's a normal feline behaviour which becomes unacceptable when done in our homes.

Stressed and anxious cats are more likely to toilet inappropriately. Common triggers for stress/anxiety-related inappropriate toileting include moving house, the owner travelling for long periods, the introduction of a new companion animal, the arrival of a new baby and a neighbourhood cat encroaching on your cat's territory. Try to establish the cause of the stress/anxiety and alleviate it. If you don't know how, contact a qualified behaviourist for help. Anti-anxiety medication may be needed to allow behaviour modification to be successful and this can be discussed with your vet.

In many cases there is no quick fix for inappropriate toileting because it can be such a complex issue. That said, taking the following steps can help reduce, and even resolve, it in many cases.

If you've tried all my tips and your cat is still toileting in the wrong places, it's time to call in an animal behaviourist to thoroughly assess the situation and your cat's behaviour. As I explained in the introduction of this article, this can be a very complex problem requiring an in-depth analysis by a qualified and experienced professional. Addressing this issue sooner, rather than later, provides a much better opportunity to successfully resolve it.

Promote Your Page Too